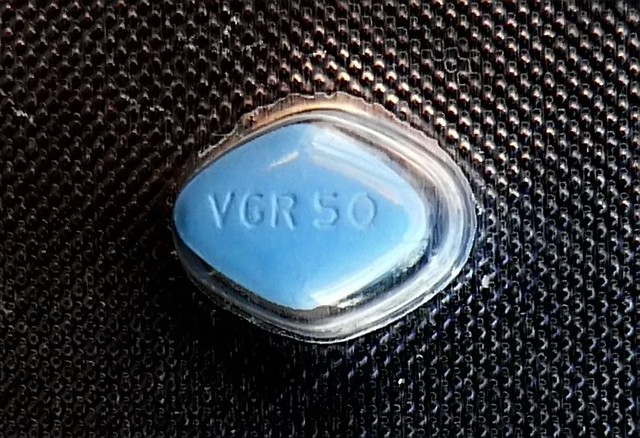 NE OF THE tall, sensuous Viagra women seen recently in television ads touting the erectile dysfunction pill for men has broken her silence and will soon be tossing aside her blue Viagra caftan for "a little variety and some fresh air, thank you very much."

Admitting that she has had enough, the Viagra woman who identified herself only as "Evelyn" said emphatically, "I am so sick of wearing this blue flowy thing all day, and just wandering around a big glass house waiting for some guy who never shows up."

Evelyn added, "And if he does show up, do I even want to give him the blue pill? What if he looks like Rudy Giuliani? What if he is Rudy Giuliani?? Frankly, at that point, ED isn't such a bad thing, if you know what I mean."

The tall brunette beauty also admitted her back was beginning to ache "from lying seductively on my stomach propped up on my elbows several hours each day, talking to complete strangers about ED in a sultry voice. That is not a good posture for me, never has been."

Evelyn said the time remaining, during which she strolls listlessly around the living room, or stares expectantly from the balcony, or leisurely combs her hair "helps a little, but honestly, how many times can a person do those things? I mean, it's an easy job and all, but I'm losing muscle tone."

She continued, "Is he on an extended business trip, or what?" adding, "I don't even know if he owns this house, or if it's just a time share. Not that it matters, but the mind wanders."

Evelyn admitted she was texting with "the other Viagra ladies," and that as a group they've decided "to give it a week, tops, before our mystery ED men come through the door."

At that point the women agreed they would leave their blue frocks behind and "get together in normal, non-blue clothes for a Happy Hour, then go to our own homes, take a shower, and forget all about leaning on our elbows looking ready for love."

Evelyn did say that the experience "gave me the skills I may need in future to talk about other difficult subjects in a sultry voice," and mentioned such topics as why men should talk to their doctors about serious Viagra side effects such as death, why a woman shouldn't feel guilty about getting out of the glass house now and then, and why cremation is the right choice for today's modern dead man who did not talk to their doctor.