Candidate says his presidential radio infomercials to the American public "will be so tremendous." 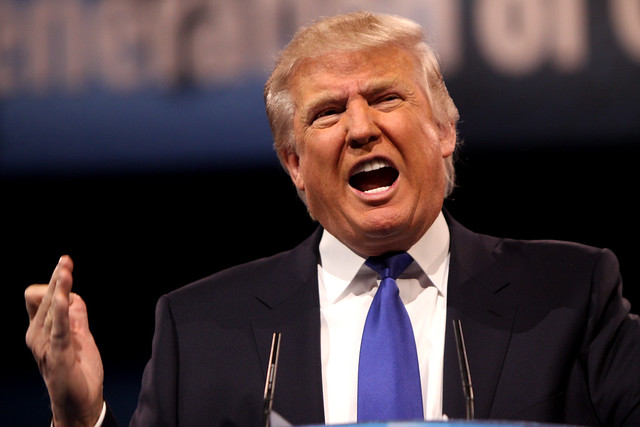 ESPITE HIS plunging poll numbers, Republican presidential nominee Donald Trump is holding fast to his predictions of a win in November, and says he is "looking forward to my weekly radio infomercials as America's greatest president."

Boasting that the radio broadcasts "will be so tremendous, and will win the greatest ratings of any previous president's—I have to say it— boring radio talks," Trump says he will focus not just on the state of the country that week, "but also on the state of my amazing product line, which, I just have to say, is an outstanding, beautiful product line."

Trump says his weekly radio infomercials will be simulcast on YouTube "so that people can see my amazing products and not just hear about them on the radio. Don't get me wrong," continued Mr. Trump, "I love radio. Radio is tremendous, love radio. But these ties you have to see to believe. I mean, feel this tie. This is 100 percent silk. It's a beautiful thing, and I wear only these ties, by the way, no other ties. These are gorgeous ties, and America will love them, too. Not to mention my steaks. Have you tried one of these steaks?"

Each week's presidential radio infomercial will, says Trump, also be tied into one of the home shopping network channels.

Says Trump, "We are working with our partners in the industry to find the best match. HSN is great, we love HSN. But we haven't made up our minds yet. But this partnership will be phenomenal. It will be the best partnership America has ever seen. America will love this partnership. You can't lose! Everyone wins in this broadcast-shopping channel thing, I'm telling you. A win for everybody, right?"

Along with what appears to be the complete reworking of the purpose and content of the traditional presidential radio conversation with the American people, Trump also plans to invite the occasional guest onto his broadcast.

"We'll have some very interesting guests on my presidential radio show," says candidate Trump. "My beautiful daughter, Ivanka, will come on, she'll be such a great guest for the women of America. Ivanka will have so many things to talk about.

C-SPAN, which has traditionally aired the video version of the president's weekly address, has indicated it will opt out of the Trump infomercials and will instead air reruns of any other president at all.