"Bless him, but dear Lord cover my eyes or cover those arms!" prays one devout but grossed-out Lutheran. 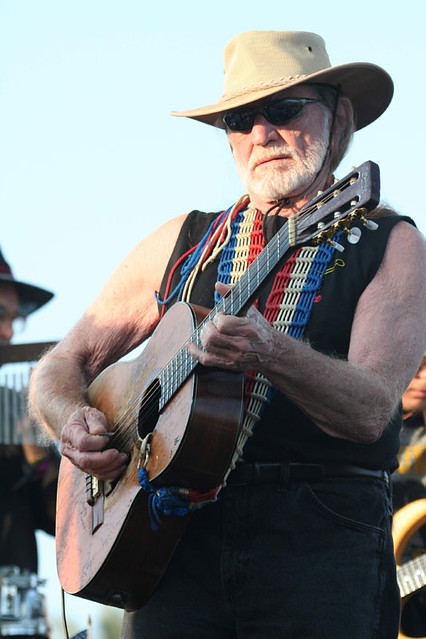 RECENT POLL OF self-identified Christians has found that 63% of respondents say they would be either "very" or "somewhat" hesitant to spend eternity in heaven if they knew they had to rub after-life elbows with a sleeveless Willie Nelson.

"I'm sure he's a lovely man and a good Christian," said devout Lutheran Jenny R. of Ames, Iowa, "but I have to admit I get just a little nauseous at the thought of those wrinkly arms peeking out of his angel robes. Perhaps the Lord could see fit to give Willie some nice long sleeves that button for all eternity at the cuffs??"

Jenny's husband Bill wondered if God "could make it so we can spend eternal life with a younger version of Willie. He wasn't bad looking in the old days. Plus his arms were, you know, normal. Not those withered tortoise necks moving in all directions and scaring the bejesus out of the little children in heaven. And our pets who have crossed over.”

Bill's sister Amy was visibly shaken by the prospect of running into a sleeveless Willie Nelson in heaven when the singer someday meets his maker.

"Bless him, but dear Lord, cover my eyes or cover those arms!" Amy cried in spontaneous prayer. "Lord, do not keep testing my faith with Willie Nelson even as you swing wide the pearly gates to welcome me!!"

"Sis gets a little emotional on the subject," Bill said.

Since the survey's results were released, news outlets report a flood of shirts with all manner of sleeves being delivered to the wrinkly limbed singer. Nelson is said to be partial to the short-sleeved graphic t-shirts he's received in the mail, but has also lately been seen not frightening children and small dogs in wrinkle-resistant, long-sleeved donations from Land's End and Eddie Bauer.

The casual clothiers have also joined forces to launch the Cover Those Arms! Foundation, whose mission is "to promote a positive style vision for a musical icon while protecting the world from unsafe exposure to toxic arms."

"We can't wade into the religious arena, so we won't speculate on heaven," explained CTA's spokeswoman, "but we like to think, if there turns out to be an afterlife, that Willie Nelson's new sense of style will follow him there."