'Did You Know?' Observations from the Desk of Rick Perry, Energy Secretary

Letĺs get the lights on in Africa! I don't know what we're waiting for. 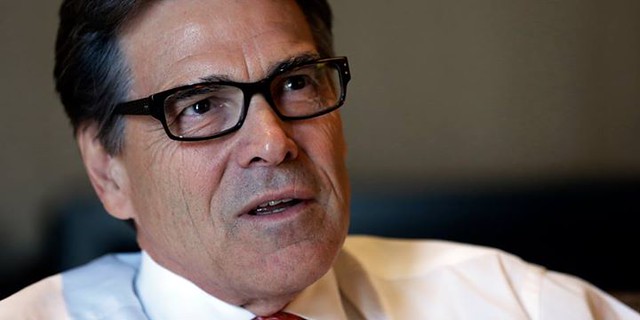 ID YOU know that electricity from fossil fuels will help Africa from the standpoint of sexual assault? That's right. When the lights are on, when you have light that shines—the righteousness, if you will—on those types of acts, I think you all will see a whole lot less perpetrating. Letĺs get the lights on in Africa! I don't know what we're waiting for.

Did you know that fracking improves God's green Earth by releasing sulfurs from Hell? Not all at once like a big old volcano. Just a nice and easy slow leak of the Devil fumes. But that's okay—letting out the fumes—because the Lord created the sun on the first day. And that's what burns 'em off.

Which brings me to this little bombshell: Did you know that "climate change" started out as a Swedish children's story written by naked socialists? Now it makes sense, doesn't it, all that scare talk. Just a spooky naked Swedish fairy tale. Oooo, I'm scared!

And I'll bet you didn't know that wind turbines are way more dangerous to life on Earth than coal mining will ever be. Because wind turbines are sending signals—not necessarily on purpose, mind you—to aliens from other planets, because of the frequencies. The spinning frequencies are so powerful that they reach waaay out there. We don't know what the turbines are saying exactly, because they don't even know. Maybe America should just stick with coal mining and stop talking nonsense to aliens.

And I know I'm not Secretary over at the HHS, but did you know that a woman who takes birth control pills—or that little spring that goes up in the private parts of a woman—it makes her not want to have children, ever. Even if you take the pills away, she will never come back to normal. That is something you might want to know, husbands, before letting the little wife go to the gynie doctor all by herself.