Just like the famous Smith Bros. cough drops, but with an extra dose of hostility. 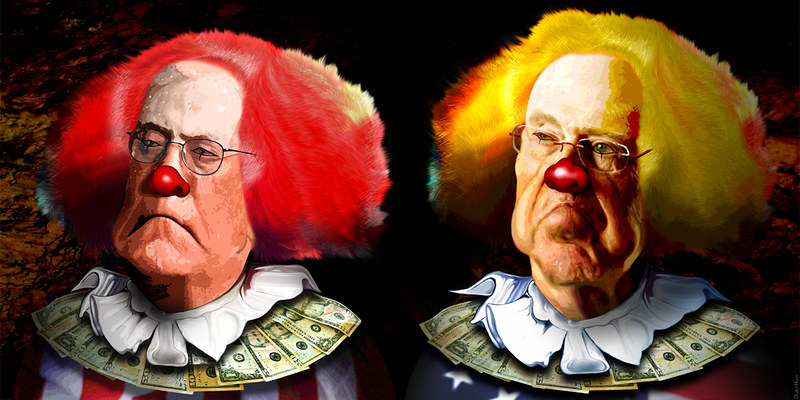 EALTHY RIGHT-WING donors Charles and David Koch, known by many simply as the Koch brothers, are parlaying their new-found name recognition by branching into the lucrative cough and cold products market.

It was announced today that the right-wing darlings are set to launch a new throat lozenge called "Koch Bros. Little Suckers," marketed as "at-home health care for the little people" with the catchy slogan, "Suck on This."

Initial flavors for the new cough drop, which will feature the visage of one of the Koch brothers on each lozenge, are bitter orange, bitter lemon, bitter cherry, and sour grape.

Consumers will see the expensive cough-drop ads on Fox initially, followed by "anywhere a corporate puppet can be made to dance by a corporate master," according to a Koch brothers' insider.

Free samples, known as "hand-outs," are coming soon. Initially, the hand-outs will be thrown out of limousines to passers-by, who, the Koch brothers expect, will claw over each other like the dirty little animals they are to grab a freebie.

After that, samples will be handed out to commuters on their way to the office, in hopes that the workers will immediately throw the samples to the ground, incensed that anyone would think they were the kind of person who accepts something without putting in a decent 14-hour day first.

"Little Suckers" cough lozenges should then finally make their way into drugstores around the U.S., where they will sell for $20 per box. Although some predict consumer sticker shock, the Koch brothers are said to be quite confident that the better American will recognize the product for the bargain it is, and find it a superior value to signing up for Obamacare like some filthy Communist or French person.