His second act will be to place Kim's backside on the $10 bill. 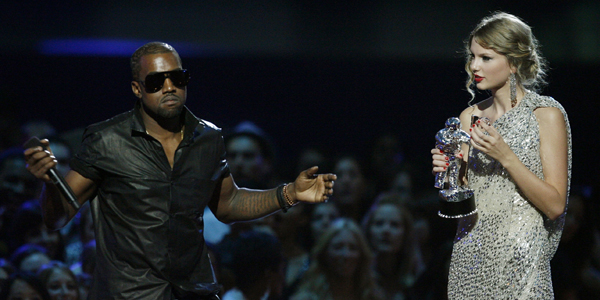 INGER-RAPPER Kanye West, having recently announced his plans to run for president in 2020, has already put forth an aggressive pair of initiatives should he take office.

West's first act as president, according to his agent, will be "to deport all of the music awards Taylor Swift has ever won and immediately deport them to Beyoncé, who, in Kanye's estimation, which the world will come around to, is the finer singer and entertainer of the two."

The logistics and legality of such a move, considering the sheer number of music awards bestowed on Taylor Swift, as well as their owner's claim on them, "have not yet been worked out, since we haven't even elected a president for the term prior to Kanye's," explained the singer's agent. "But we are not afraid to deport these awards, any more than we are afraid to crown Beyoncé the queen of all female recording artists. Aretha excepted. Those two are tied."

Meanwhile, Taylor Swift's agent has released a statement that the singer "has no intention whatsoever of relinquishing her awards to Beyoncé, whom she greatly respects, or indeed to anyone else." The singer has already secured her large cache of awards in an undisclosed location, "where Kanye" the agent said, "will never find them, even if he lasts two terms."

Swift's agent added that the singer "feels that Kanye West is already overstepping his office, even before he's taken the presidential oath. She, for one, will not be voting for him in 2020, or any other year."

West's second initiative after moving into the White House, which his agent estimates "should take about his first year in office. He has a lot of stuff," will be to call for his wife's backside to be placed on the $10 bill.

"Everyone's talking about how women should be on our paper money," the agent explained. "Well, Kanye's going to do something about it. Kim, our next First Lady, after the next First Lady, is just as qualified to appear on money as Pocahontas, or Eleanor Roosevelt."

However, the potential future president has, according to his agent, "said that if either of those two fine ladies insist on being on the $10 bill, Kimmy would be more than happy to move her backside to the $20."